Warning: "continue" targeting switch is equivalent to "break". Did you mean to use "continue 2"? in /homepages/10/d398796467/htdocs/wp-content/themes/flex/framework/theme-options/inc/ReduxCore/extensions/customizer/extension_customizer.php on line 291

Warning: "continue" targeting switch is equivalent to "break". Did you mean to use "continue 2"? in /homepages/10/d398796467/htdocs/wp-content/themes/flex/framework/theme-options/inc/ReduxCore/extensions/customizer/extension_customizer.php on line 304

Warning: "continue" targeting switch is equivalent to "break". Did you mean to use "continue 2"? in /homepages/10/d398796467/htdocs/wp-content/themes/flex/framework/theme-options/inc/ReduxCore/extensions/customizer/extension_customizer.php on line 330

Warning: "continue" targeting switch is equivalent to "break". Did you mean to use "continue 2"? in /homepages/10/d398796467/htdocs/wp-content/themes/flex/framework/theme-options/inc/ReduxCore/extensions/customizer/extension_customizer.php on line 342

Warning: "continue" targeting switch is equivalent to "break". Did you mean to use "continue 2"? in /homepages/10/d398796467/htdocs/wp-content/themes/flex/framework/theme-options/inc/ReduxCore/extensions/customizer/extension_customizer.php on line 361
 Whats New In Detroit!

If you haven’t been to Detroit lately, you might be surprised to hear that things are changing pretty rapidly when it comes to real estate. Every week it seems that another building or piece of property is being purchased with plans to transform it into something great. Between new developments and real estate programs, more and more buyers are being drawn to the city. Here’s what’s been happening in the world of Detroit real estate.

Hockeytown’s New Home
By 2017, the Detroit Red Wings will be moving into their new home located in Detroit’s Cass Corridor. The $650 million, 785,000-square-foot arena will seat 20,000 fans and feature restaurants, retail and offices. Not only will this new development bring jobs and business to the city, it will be driving property values up. A derelict home that was purchased for $25,000 in 2002 recently sold for approximately $3.5 million. The new arena is also inspiring more development in neighboring areas.

The District Detroit
Sparked by the development of the new Red Wings arena, District Detroit – a 50-block development project that will connect Midtown and Downtown – will be comprised of five new neighborhoods spreading out south and westward from the where the stadium will be located. Connecting the theaters and sports stadiums, shops and studios, the District Detroit development will help connect existing residents, while drawing in new businesses and tenants. 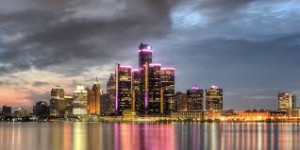 Just Do It
Recently the major shoe company, Nike, announced that they will be opening a 22,000 square foot community store in the heart of downtown. Opening in the spring of 2016, the Detroit Nike store will be one of four other community stores located in Portland, New Orleans, Chicago, and Washington, D.C. – all of which opened in April of 2015. Quicken Loans, founded by Chairman Dan Gilbert, holds the master lease to the former F.W. Woolworth Co. building where the new Nike store will call home.

More Than Commercial
Besides retail and entertainment expansion, the Detroit Metro area is becoming one of the hottest growing housing markets. This summer, the National Association of Realtors named Metro Detroit in the top 10 hottest housing markets in the country. As Detroit continues to expand, more and more people are looking for a place to call home closer to the heart of the Motor City.

A City Reborn
Over the last few years, Detroit has been making a new name for itself, drawing entrepreneurs, restauranteurs, and developers to name a few and its obvious the momentum isn’t going to slow down anytime soon. So whether you’re looking to live, work or play – Detroit is the place to be.

Are you looking to buy a house and need a mortgage? We would love to help! Please leave a comment or Click Here and find the most convenient way for you to contact us.

My name is Marc Edelstein and I possess 17+ years of originating home loans. I have built my business using three core values; honesty, integrity, and exceptional customer service.

This site uses Akismet to reduce spam. Learn how your comment data is processed.